BY: RORY SPEARS ASST. EDITOR AND LEAD WRITER FOR GOLFERSONGOLF.COM 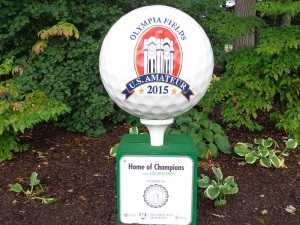 The final round of the Illini-Olympia Fields Invitational was the best weather day of the of the tournament, and it was the best day for Illinois who shot a 3-under par 277 the best score of the championship to win by 11 shots.Illinois Freshman Dylan Meyer shared the medalist honors in his first college event. Meyer shot a 1-over par 71 to finish the event at +3. Meyer was tied by Stanford’s Maverick McNeely.

This was the second time Illinois has won the championship, illinois won the title in 2008 and the individual honors went to current Illinois assistant coach Zach Barlow. the key was the final nine holes, where the Illinois counting scorers were 7 under par. Over days one and two Illinois was +15.

Illinois Senior Brian Campbell who struggled on day one with a 10-over par 80, rallied in round 3 to shoot a 4-under par 66 the low round of the tournament. In third place was Illinois junior Charlie Danielson just one shot behind the leaders, Danielson shot a 3-under par 67 in the final round. Freshman Nick Hardy tied for 12th place with a score of +8 for the tournament.

The final round team score of 277 by Illinois was only two shots off the tournament record set by Oklahoma State in 2007.

“This is a great way to start the season,” said Illinois head coach Mike Small. “It was a strong field, a hard golf course and we really played well. It was a good team win. We didn’t finish to well the first two days, but the back nine (on sunday) was pretty good. And that’s important to us. The freshman were strong all week- I was happy with them and how they competed. Then to have our veterans step up like they did today, that just sealed the deal.”

Small added, “Dylan winning you can’t expect that but we knew he had it in him. He deserved it. He handled himself well coming down the stretch. He was solid and on point all day. For those two freshman to play like they did in their first college event shows they have potential. And our team wants to thank Olympia Fields for hosting the event and making it a first class event.”

Doug Ghim from Arlington Heights and a member of the University of Texas team tied for 23rd place and finished the 54 hole event at 12 over par.

Illinois will return to tournament play next week at the Wolf Run Intercollegiate in Indiana where they will look for their fifth straight title in that tournament.