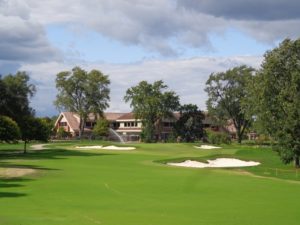 The second round of the 101st Western Junior Golf Championships at the Evanston Golf Club, saw Jeff Doty of Carmel, Indiana shoot a six under par 64 to take a one shot lead over Karl Vilips of Perth Australia, the #1 rated player in the AJGA Rolex Rankings.

Doty heading into his sophomore year at Northern Florida started off with five birdies and no bogeys on the front nine.

“The putter was hot” said Doty “I hit the fat side of greens and then made about 100 foot of putts. Then after the turn I just turn it one shot at a time.”

Vilps who is committed to Stanford, drove the green on the Par 4, 5th hole, his 14th hole of the day. That ended up putting him in position for a two-putt birdie, and then he made two more birdies coming in to earn second place.

The round of the day went to Will Thompson of Naples Florida who shot a 7 under par 63, Thompson who is committed to Texas said he “never sniffed a bogey.” Thompson sits alone in third place two strokes behind the leader Doty.

The cut came at two over par, and 44 players advanced to the 36 hole (weather permitting) final on Thursday. Players advancing included defending champion William Mouw, who is trying to be the first player in 77 years to successfully defend his title. Mouw is T-13 and sits at one under par.

Luke Armbrust of Wheaton fell back with a one over par 71, and is four shots off the lead. Brendan O’Reilly of Hinsdale made the cut and is T-8 at two under par. Illinois recruit Tommy Kuhl of Morton missed the cut by 1 shot.

Tyler Isenhart of Geneva made the cut and is at even par 140, he sits T-17. More details o the champion at Westernjunior.com.