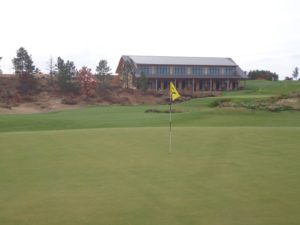 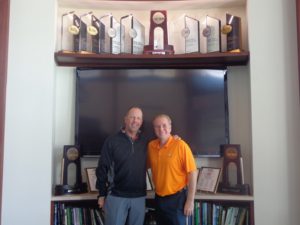 THE GOG BLOG by RORY SPEARS, Director of Content and Creation. Follow Rory on Twitter @GogBlogGuy, or on Facebook or Linkedin. With Illinois Men’s Golf Coach Mike Small at the U of I practice facility.

THE 12TH RANKED Fighting Illini are position to won yet another Big Ten Championship, this year again at the Baltimore Country Club, known as Five Farms in Maryland.

After trailing Ohio State by two shots after the first 18 holes, the Illini rallied behind seniors Nick Hardy with a 2 under par 68,  (T-2) and Dylan Meyer a 69 (T-8) with teammate Michael Feagles who carded an amazing second round 6 under par 64.

As a team Illinois is 11 under par through 36 holes. Ohio State the first round leader is still sitting right on the heels of the Illini, only 1 shot back. From there the rest of the field is some distance behind. Iowa is in the third place with Penn State, but those schools are 14 shots back of Illinois, and then there is more drop off to Northwestern in fifth place.

“I’m very proud of the presence and the look we had today, that was Illini golf.” said head coach Mike Small. “This is a five man team and five guys showed up today. I’m proud of the way that Michael Feagles and Giovanni Tadiotto bounced back with strong rounds. Ohio State is playing great golf and we’re excited for the challenge on Sunday. It’s going to be a good, old=fashioned Big Ten Championship.”

Today is the final round of the championship on the 7,181 yard, Par 70 Five Farms East Course at Baltimore CC. Final round action is now underway and Ohio State is now back in the lead after 4 holes by 1 shot. Northwestern is the second highest rated Big Ten team at #35, Ohio State is at #73.

Dylan Wu leads Northwestern early in Round 3, and is 2 under par for the championship.

Illinois is looking to bounce back after leading at the 36 hole mark a week ago and losing to Ohio State at the Robert Kepler invitational in Columbus Ohio, as the Buckeyes rallied to win on the final day.

The Illinois Women’s Team will move on to NCAA Regional play and will compete alongside of Big Ten teams Northwestern, Ohio State,Purdue and Wisconsin. Six of the team will move on to the NCAA national Championships in Stillwater Oklahoma.