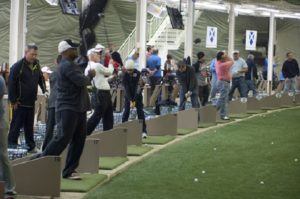 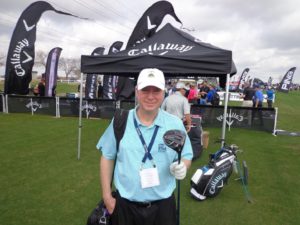 BACK IN THE SADDLE AGAIN, yes I’m finally home from warm and sunny Florida and there is some catching up to do.

I was on the road for 19 days, and on  too many days there was too much driving to do, between stops, to have a proper amount of time to punch out all the stories I have. That being said do stay with us because over the next month there will be plenty of stories to tell about the trip.

There is much to tell about the PGA merchandise show, and what I found and learned. Beyond that, there is what’s new at Innisbrook Resort home of the Valspar Championship on the Copperhead Course (which I played), and the newly renovated North Course. Word is now that Innisbrook will close it’s South Course this June, and begin renovation work, with the course reopening late in 2018 or early 2019. I am hoping that the resort owner by Salamander resort will then redo it’s Island Course that could use some upgrades. See Innisbrookgolfresort.com for details on a stay and play. I will add a story on Innisbrook in the days ahead. For this years Valspar, Rory is coming, it’s a big story, sure beats Tiger.

SPEAKING OF WHICH, there was some talk about Tiger moving the needle at the Farmers, CBS says it’s ratings took a big jump. The numbers maybe a bit exaggerated but maybe there is some truth to it. You see this week when rock icon Elton John’s tickets went on sale for his concerts later this summer at the United Center, they sold out reportedly in less than 1 minute. I guess there is market for former stars on a farewell tour, the same could be said about Woods, who is likely one more injury away from calling it quits for good.

NEXT STOP NAPLES, I played two properties there, first up Tiburo`n where the accent is on great golf and more at this Greg Norman property. I had heard things about these Norman courses being too tight, to this, to that. Forget it, not true, this private but public venue is a winner and worth your visit when you want to do it the right way. For those if you who enjoy great accommodations off the golf course there is the Ritz Carlton, and better yet for those who want a great tasting beer, forget the Dilly-Dilly, Go Tiburon Red you will be glad you did. A special thanks to Ricky Potts in marketing for pointing us in the right direction here. Available on property on tap only. Our story and pictures will be another highlight in the posts ahead.

QUAIL WEST-NAPLES former Illinois PGA Pro and former section president Casey Brozek has really landed on his feet at the Quail West Country Club, where over 32 million in improvements taking place. This country club should be a model for doing it right and a having a a solid plan for bringing members. The new Wellness Center and other improvements, include health club space, spa and salon. The 36 holes are two solid courses named the Preserve and the Lakes Courses, both winners originally done by Art Hills with Hills disciple J. Drew Rogers now on board for progress going forward. My interview with Brozek plays in the days to come.

STREAMSONG BLACK, my third visit to Streamsong allowed me to play the new Gil Hanse Black Course that has been opened for just over 4 months. Black is a great addition to the resort, it fits well and compliments the Red by Bill Coore and Ben Crenshaw, and the Blue by Tom Doak. Some of the work around the sand dunes Hanse had to work with is simply amazing. Not many architects can make an under 100 yard par hole 3 hole from most tees, as challenging and fun as Hanse. Streamsong.com book your tee times today, my feature is still to come.

PGA VILLAGE, Port St. Lucie, played with BIG 3 partner Len Ziehm. For my last of 11 rounds on the trip (9 of 18 holes, 2 of 9 holes) Ziehm and I played the (Pete) Dye Course at PGA Village, where the Ryder Cup was on display in the lobby of the clubhouse. I also played the recently renovated Ryder Course while in PSL. Ziehm and I will add our podcasts of the PGA Show and PGA Village and it’s courses coming up soon. Do stay tuned and clicked in.

ZIEHM has posted a story recap on the PGA Merchandise Show on his website lenziehmongolf.com and Len has all the latest on Florida area golf if your headed that way yet this winter. Len also won three awards at the merchandise show from the International Network of Golf (ING). One from a story in the Arlington Heights Daily Herald on 2017 U.S. Open Champion Brooks Koepka, another on the Grand Geneva Resort in Wisconsin in the travel writing category, the final award came from a piece done on Illinois Open and Illinois Amateur Champion Patrick Flavin. “I was caught by surprise,” said Ziehm on winning three awards.

Then there was the drive home, where the temperature dropped from 81 to 16 in Arlington Heights, at least the snow waited until I was less than two miles from home.

ON THE HOME FRONT, BIG 3 partner Tim Cronin was the lone golf media member in attendance at the recent City of Chicago hearing on a proposed new lakefront Jackson Park golf course. His story is at Illinoisgolfer.net. This project originally proposed as a $30 million dollar project, is now being billed as a $60 million dollar project. The question is where that money comes from, and as of now there is now no money to make the project happen.

Golfers on Golf has learned that architect Ben Crenshaw did tour the proposed routing with project director Mark Rolfing, and decided the project was not a good fit for he and partner Bill Coore. Apparently BC and BC have their style of land they like to work on, and this was not the right fit aka “horses for courses”. Coore and Crenshaw are hoping before too long that Pinehurst Resort will give the go-ahead for a redo of the course formerly known as “The Pit”, and use that land with new land the resort has purchased around the area where the former Pit routing ran. C&C wish the Tiger Woods design group nothing but the best with the Chicago Lakefront project should it come to fruition.

The Chicago area winter golf shows start this week in Tinley Park on Friday. More on that to come. RS