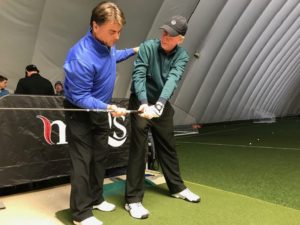 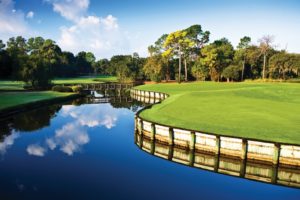 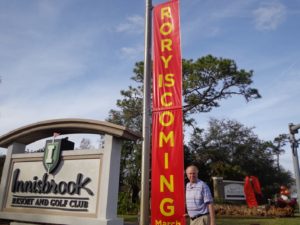 THEY SURE KNOW HOW TO PUT OUT A BIG WELCOME, the Innisbrok Golf Resort in Palm Harbor that is. I had a lot of fun with the resorts retired sales manager Doug Schmidt, and PR star Ramona Herald with the banners and signs that announced my arrival, it was for me right ? who else could it be.

It was a fun weekend to be in the Tampa area, golf and the NHL All-Star game all in one. I did the smart thing and stuck around Innisbrook for the golf, and got out early yesterday and beat the heavy rain that dumped over 3 inches starting in the afternoon and running into early evening. It was more rain than the area had received in almost two months. But on Sunday morning it was a great sunny day and the greens on the recently renovated North Course were rolling. About 13 on the stimp according to one marshal who would know. It was almost Oakmont like, there is no problem getting the ball to the hole. I like the North Course and the work that was done and now it appears the South Course will close in June for upgrades, stay tuned.

Copperhead is in great shape for the upcoming Valspar Championship in March, the only drawback was the cart path only two months out. The renovation from two years ago has kicked in and resort golfers are enjoying this course as much as the pro’s will in March (5-11). The Snake Pit, holes 16-17-18 are a fun but challenging test to finish your round. More on Innisbrook in the week ahead.

THE TIGER TRAP, has it started up again, or was it a one week frenzy. There were complaints galore about how the Farmers TV broadcast this past weekend turned into all Tiger and occasionally the players who were winning. Golf needs to be very careful about going down this road again, and risk losing viewers and people playing the game.

For those of you who think Tiger is #GOAT, Greatest of all time. Please seek help, that is all.

Hopefully after one week much of this will be over and golf can return to the great run it’s had in recent years. I get it, Woods is kind of like rock star on his farewell tour and people want that one last look before he goes away for good.

Speaking of the Farmers, it is still not over and because the final group took six hours to play 18 holes and the playoff didn’t finish before the sun set. Now with only 12 marshals available, no fans will be let back in to see the finale. By the way, has JB Holmes hit the ball yet, another one of those should bring a “that’s two” from the rules officials.

THE PGA MERCHANDISE SHOW was a great way to start the 2018 golf season, and I’ll have plenty in the weeks ahead from what I saw there.

The show’s big winner’s were Callaway, Wilson, Titleist and Taylor Made, all with new product or in Wilson’s case real exposure on the new Driver vs Driver 2 program that will start airing in the fall. Callaway’s Rogue Driver, Woods and Irons drew plenty of attention and I have you hearing from the Callaway experts who created Rogue.

WITH THAT it’s off to Naples and a look at Tiberon, a new stop for us. RS.