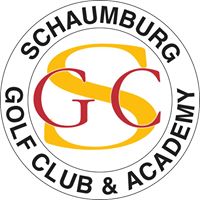 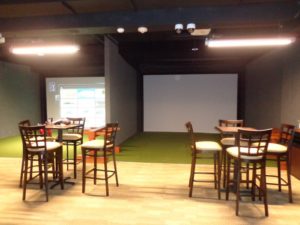 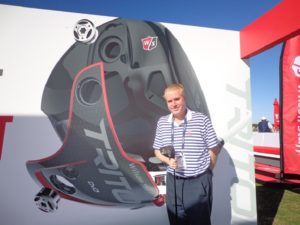 THE GOG BLOG by Rory Spears,. Editor and Director of Content. Follow Rory to the PGA Show and on Facebook, Linkedin and Twitter @GogBlogGuy At the Wilson Golf booth with the new Driver vs Driver Winner, Triton.

IF THERE is ever really a day that launches golf for the year ahead, it’s demo day at the PGA Merchandise Show.

It gets many of the nations golf pro’s out hitting balls on a driving range. trying out a new club that might go in their bag, but more likely to go in their pro shop and then in your bag before it goes out on the golf course.

The next three days the show moves indoors to the Orange County Convention Center in Orlando Florida. It’s quite a show as trade shows go, for those of you in Chicago imagine McCormick Place loaded end-to-end with golf products and golf apparel. It really is something to see, The Golf Channel will have a special on it in the next day or two. 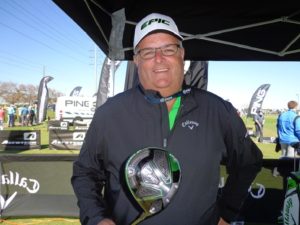 One of the highlights of demo day usually revolves around new drivers and this year was no different.

First on the tee was Wilson’s Driver vs Driver winner the Triton, that now according to Wilson Golf GM Tim Clark is now totally conforming thanks to the USGA. Triton if you didn’t know is now back on the shelves in your golf show and retail stores like the PGA Tour store.

I’ll speak more with contest winner Eric Sillies and Clark in the next two days, and find out more about what’s next for Sillies and Wilson Golf. Could Iron vs Iron be next. I did hit the Triton and it feels a little funny when you first line it up, but after a few swings it settles right into your comfort zone. I had mixed results with an 9.0 loft that Clark had me hit. But for fun Maryville academy professional Juan Espejo had me hit a 12.0 loft and with todays wind, it really sailed all three times I hit it. Clark showed me the small changes the USGA had Wilson make to make Triton conforming, you really have to wonder what the USGA was thinking. I’d like to ask them again, but I’m sure the same answer would come my way, that the testing process is confidential.

CALLAWAY GOLF has introduced a new driver called EPIC. It’s part of the Great Big Bertha family, it has a novel inside that you don’t always see. It’s also part of the reason that the club is not very easy to build. 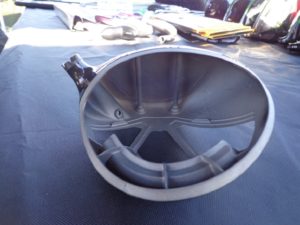 The inside of the new Epic Driver by Callaway

I did not hit the Epic but I will back in Chicago in the weeks ahead. Callaway Golf has some good things going on with putters.

First off with the Odyssey putter line and then with the purchase of the Sean Toulon Putter Company.

I’ll have more on Callaway as well over the next few days. If you watch the golf industry and companies that are the major players in club making, you have to be impressed with the direction of Wilson and Callaway. Both companies are generating a lot of real golf product buzz.

TAYLOR MADE GOLF which has been for sale for a while now, might have a group ready to buy them, which is news in itself, but what is adding some fuel to the fire here is that Tiger Woods might be part of the group. I’m sure the folks at Bridgestone will be thrilled if there is any truth to this rumor, not sure if there is any more news on this subject coming out while the show is still on. This is not real golf product buzz.

TITLEIST GOLF announced some new additons to the Scotty Cameron Putter line, with the Futura and Newport lines. But while the Titleist hitting area was busy with demo day patrons hitting the new 917 line, what seemed to be an even more active area of Titleist was the short game zone loaded with Bob Vokey wedges.

THE FOLDS OF HONOR held it’s annual show party last night at the convention center, it’s always great to hear the tribute stories from family members of our military veterans who have been helped by the foundation.

The convention side of the show starts shortly, I’m headed to the floor to find out who is headed to the course and the tee box, and what else is good golf news. Stay clicked in.

For those of your back at home, stay warm and get to McQ’s Dome in Bolingbrook and starting getting ready to take your game outside. RS