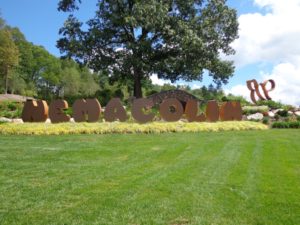 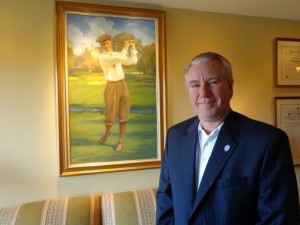 The award has been presented since 1994, when it was first presented to Patty Berg. Fletcher received her award on October 6th during a luncheon at the Indian Hill Club.

The award is given to a woman who shows or displays a quality of leadership, involvement and commitment to the game of golf on either the amateur or professional level. The honoree will also have won or competed in a WWGA championship or made a significant contribution to the organization of the game of golf.

Fletcher a native of Fort Eustis VA., started playing the game of golf at age 13. Fletcher played four years of college golf, first at Longwood University, and then two more seasons at Ferris State University in Michigan. Fletcher says she went to Ferris State because at the time they were the only school offering Professional Golf study as a major.

From there Fletcher landed on her feet in Arizona at the Desert Highlands Golf Club in Scottsdale. After both an internship at Desert Highlands and then the job of assistant professional there, Fletcher moved onto the Glenview Club in 1987 as instruction and golf operations. She still teaches there in the summer when away from the NU golf program. 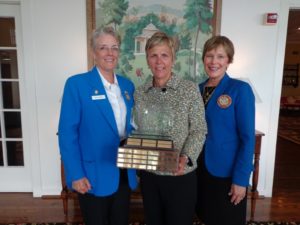 Fletcher spent time working as the assistant director of Betsy King’s Wachovia Classic from 1996 into 2004.

Fletcher became the head coach of the Northwestern Woman’s Golf Team in May of 2008. Only two years later Fletcher was diagnosed with breast cancer. She went through months of of both radiation and chemotherapy before she beat cancer.

During her fight against cancer she never missed one of NU’s tournaments and only a few practices, her players never felt all the issues Fletcher was dealing with because Fletcher found a way to never appear as ill as she was at times.

Fletchers team won it’s first Big Ten Championship in 2013, and they have been winning championships ever since.

“I am still overwhelmed with the news of being recognized as the 2016 honoree,” said Fletcher. “My ties to the Glen View Club and the many members who are affiliated with the WWGA have made me aware of the tireless and significant work this organization continues to do on behalf of woman golfers. In my work of recruiting the best players to Northwestern, I attend both WWGA championships every year.”

Fletcher added, “looking back on the history of the other honoree’s is like looking at the history of a ‘who’s who’ of golf. It’s a tremendous honor to be associated with the likes of Patty Berg, Louise Suggs, Nancy Lopez, Peggy Kirk Bell and Kathy Whitworth. I am not sure how i got lumped in with these legends. I will continue to live up to the standard they have set in promoting golf and developing a passion for the game.”

WWGA President Kim Schriver added, ” As a parent and Director of the WWGA who has seen junior golf grow and provide young women an opportunity to compete in college, Emily is the coach I would trust to mentor my daughters on and off the golf course. She exemplifies the values, discipline and character that will grow the game and positively influence young women.”

In the last 45 years, the Woman’s Western Golf Foundation has granted over $3.5 million dollars of scholarships to more than 675 scholars from 45 states and over two dozen women’s college golf programs.

The WWGA has no paid staff and Directors and Trustee’s are volunteers who pay their own expenses. They run two championships a year, their national amateur championship and a junior championship. For more information on both championships in 2017 visit WWGA.org.