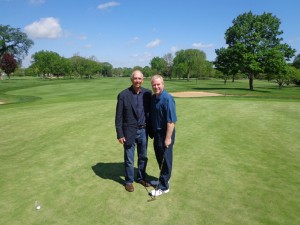 THE Encompass Championship tee’d off this past Monday with media day at the North Shore Country Club, defending champion Tom Lehman was on hand to speak with the media and sponsors of this years tournament. (Above) Lehman with the only person who was able to recreate and make the winning putt from last years championship on the final green at North Shore with the camera’s rolling.

The 2015 Encompass Championship tee’d off on Monday with media day and a visit from defending champion Tom Lehman, who expects to be right in the hunt in this years tournament.

Lehman came in on Monday morning fresh off a 4th place finish in the previous weeks Champions Tour event.

But his game continues to be solid and he should be in the mix again with the other big names that will play that week at North Shore Country Club. If there is one disappointment about this years championship is that nobody is sure about what the future holds. Encompass Insurance will retire as the primary sponsor and no new title sponsor has been named as yet. North Shore Country Club has major renovation plans on the table for the golf course, clubhouse and the pool. But there is no word yet exactly when they will start and or what order they will happen in. If the golf clubhouse or golf start renovations, the tournament will have to find a new home.

The championship released a statement this afternoon that they are looking for volunteers for the championship, to volunteer visit the tournaments website listed below.

Tom Lehman held a press conference and he had several entertaining stories along the way, plus answers to golf questions from the assembled media. Below is a replay of that session.

Stay clicked in to the Gog Blog for more information on the Encompass Championship as we get closer to Championship Week. The dates are new for 2015, having moved back to July 10-12, tournament weeks starts on Tuesday and there are a series of pro-am events. Celebrities will play during the tournament again, a list of those will follow shortly.

Visit Encompasschampionship.com for tickets, volunteering and other information.