The Palmer Cup coming June 12-13-14, the USA vs Europe in an amateur style Ryder Cup format event. Walk with the players in the fairways, free admission and parking. Follow the progression at Rich Harvest Farms, three major championships in just 13 months in Sugar Grove. First on the tee is the Palmer Cup, this August the Western Amateur, July of 2016 the UL LPGA International Crown. 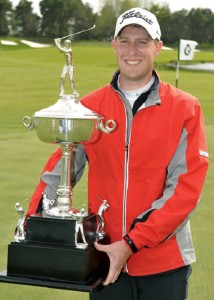 Jim Billiter of the Merit Club in Libertyville.

There is a new champion in the Illinois PGA Match Play Championship. Jim Billiter of the Merit Club in Libertyville won his first IPGA Major Championship on his 29th birthday. Happy Birthday Jim, you earned it.

Earn it he did on the 21st hole of his championship match with Brian Brodell now with Mistwood Golf Club in Romeoville.

Billiter thought he had lost it on the par 3, 3rd hole when he put an 8-Iron in the drink off the tee. But Brodell hit the back of the green and watched his ball jump over the back and into the deep rough.

After Billiter hit from the drop zone to 6 feet, Brodell chunked his chip short of the green and had to hit again from the rough. The second time he left his shot 5 feet from the pin, but when Billiter made his six foot bogey putt, Brodell missed from five feet to end the match. 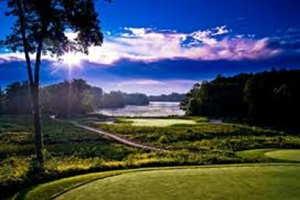 It was not exactly the way either player wanted to end. Billiter admitted he thought he had lost the match after hitting his tee shot in the water.

Billiter had it a little easier in the morning when he defeated Simon Allan of Prestwick Country Club 4 & 3. Brodell meanwhile had his first match extended to 19 holes with Kyle Bauer of The Glenview Club.

The biggest surprise of the tournament was the collapse of the top seven seeds who lost on Wednesday. Three time champion Curtis Malm headed the list of unexpected early departures. Malm was followed out of the tournament by 2010 Champion Travis Johns the No.2 seed. Garrett Chaussard #3, Matt Slowinski #4, Rich Dukelow #6 all lost matches as well.

The 64th Illinois PGA Match Play Championship was conducted at Kemper Lakes Country Club, that is still wrapping up some renovation work by Rick Jacobson. The second IPGA major of the 2015 season will be the Illinois Open in July, to be held for the first time at two courses. In the new format both Royal Melbourne in Long Grove and Hawthorn Woods Country Club in Hawthorn Woods will be used.