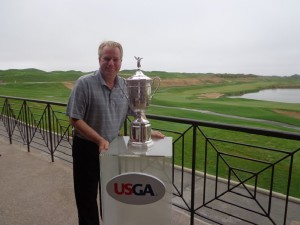 How about “Mr. Overated” Rickie Fowler, so overated that he just went and won the so-called “Fifth Major” The Players Championship.

Fowler rallied in the closing holes to take a clubhouse lead and said come and get me. Sergio Garcia and Kevin Kisner did just that forcing a 3-man, 3-hole playoff.

When three holes were in the books, Garcia was gone and Fowler still had Kisner to contend with. So he did, on a replay of the famed par 3, 17th hole, Pete Dye’s famed “Island Green.” Fowler simply made another birdie and that was it. The win was long overdue, but for Fowler he will take it. Now he will target the four majors, and hope to win one of those.

Fowler put himself back on the map last year when he was the only player to finish in the Top 5, of all four majors. But that was as close as he got, this year with this win he moves closer to gaining some of the respect that appeared to be slipping away.

As for the tournament itself, those who got to see the final round or most of it called it some of the best drama in a long time. Good sports action and suspense. It’s too bad that some of the TV networks and sportscasts didn’t give it more play.

FOWLER wasn’t the only golfer who got to spend time with a neat trophy on Sunday.

Your’s truly logged about 15 minutes with the Men’s U.S. Open trophy as it made it’s tour towards Chambers Bay for next month’s open. The trophy tour by the USGA and Lexus is just yet another new way the USGA is promoting and growing the game. A tip of the cap or golf visor to them, and the golfers who came out to Harborside International Sunday morning, or went to Cog Hill in the afternoon to greet the glowing piece of silver. It’s just too bad the trophy didn’t get more advanced promotion so more golfers could come out and see it. 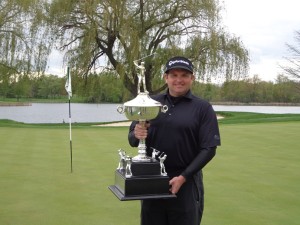 The Four-Peat ? Yes that’s what Curtis Malm is playing for this week at Kemper Lakes Golf Club in Kildeer.

Malm has won the championship three straight years, and is bidding to be the second golfer in section history to win four in a row.

Last year Malm defeated Travis Johns of Medinah 1 UP in the championship match to win. This year since Johns was the 2014 IPGA Player of the Year, he comes in as the #1 seed, with Malm being #2. It could be a great rematch in the finals on Thursday afternoon. Click in to IPGA.com or keep it right here for more on the championship[ this week.

I head out to Rich Harvest Farms in Sugar Grove today to take a look at the host course for the Palmer Cup coming June 12-13-14. It should be a great event and fans can walk the fairways behind the players in these international matches. Admission and parking will be free. The Palmer Cup salutes the legend of Arnold Palmer, and is player between top American college players and top European college aged players. Thomas Detry who plays for the University of Illinois will represent Europe in the matches.

There is a break in the rain, go play. RS.