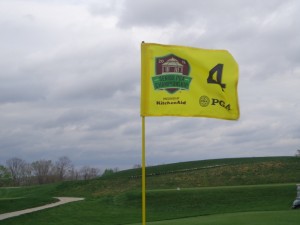 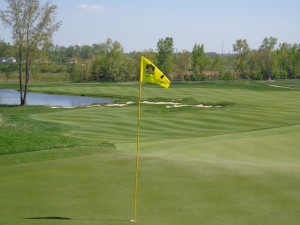 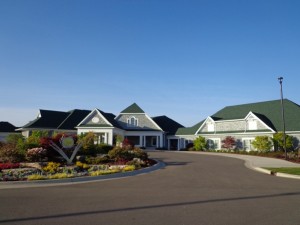 It’s a return to the Golf Club at Harbor Shores in Benton Harbor Michigan today for the golf media.

Both the club and the PGA of America are anxious to show off some changes to the golf course, and the newly redone greens. They should be in fine shape by the time the Sr. PGA Championship returns to Benton Harbor in May of 2016.

The Golf Club at Harbor Shores is a 90 minute drive from downtown Chicago. It is operated by the Northbrook based Kemper Sports Management.

The golf course is a signature Jack Nicklaus design. Colin Montgomerie won the 2014 Sr. PGA Championship at Harbor Shores, he is defending his title at the French Lick Resort in just three weeks.

Golfers as the warm weather rolls in, be sure to visit Nickluas.com or hit your local supermarket for information on the new seven flavor line of Jack Nicklaus Ice Cream. Winn-Dixie, Bi-Lo and Kroger Food stores.

The Glenview Park District Clubhouse is getting a facelift, along with the golf course renovation the facility will look brand new this summer when it reopens.

It’s not just a renovation of the golf course, happening over at the Glenview Park District Golf Club.

The clubhouse is getting a facelift and being given a more modern look.

It’s expected that the clubhouse will be ready to open by the time the golf course does. As of now the park district is hoping to reopen the course from the Libertyville based Rick Jacobson renovation in July.

Point O’Woods has undergone several changes in recent years, both to the golf course and with the building of a new clubhouse and some cottages.

For many years Point O’Wood was the host of the Western Amateur until it returned to the Chicago area. The club will again host the amateur in 2019.

Coming this Saturday May 2nd the Sentry World Golf Course will open for play to start the 2015 golf season in Stevens Point Wisconsin.

The golf course that finally had a soft-opening last fall is now fully ready to go, from the Robert Trent-Jones and Jay Bilasi renovation.

In addition the club has announced that long time head golf professional Brian Dumler will now focus on golf instruction and player development, Dumer the Hoffman Estates native is looking forward to helping both experienced and new players improve and enjoy the game even more.

The Gog Blog returns soon, with an update on Harbor Shores and other area golf news. Now Go Play, the weather is warming up. RS.