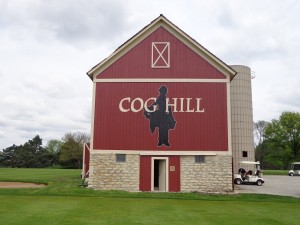 The Illinois Men’s Golf Team is off to a good start as it looks for it’s sixth Big Ten Championship in seven years.

The first day of the championship that is now being contested at Victoria National Country Club in Newburgh Indiana, was intended to be 36 holes.

But due to a two hour frost delay the second round of 18 holes was not completed. Most of the golfers were near completion, with those remaining on the course having only one or two holes to play.

When the horn sounded to stop play for the day, Illinois was at 13 under par and held a four shot lead over Iowa.

“The second round is not complete but I’m seeing some pretty good golf being played,” said Mike Small, Illinois head golf coach. “We had a little hic-up at the end of the first round, we lost our focus a little and didn’t finish. But we started strong on the front nine in round two and got things going again.”

Illinois scores were the following. The team was lead by Freshman Nick Hardy who completed all 36 holes with scores of 71-69 and is -4, he is T-3. Thomas Detry 71 and -1 through 15 holes in round two is -2 and T-5. Detry is tied for fifth place with Illinois teammate Dylan Meyer who carded 72 and -2 through 17 holes in round two -2 overall. Charlie Danielson 74, -3 through 16 holes in round two is -1 overall and T-8. Senior Brian Campbell opened with a two under par 70, but has struggled in round two and is five over par through 17 and +3 for the tournament, he is T-27.

Tee-times to complete round 2 will start at 8 AM today EST, and the third round will start at 9 Am. Final round tee-times on Sunday will begin at 8 Am.

The Victoria National course designed by Tom Fazio, is playing to a yardage of 7,124 and to a par of 72 for the tournament.

Illinois entered the tournament as the highest ranked team in the country at No.2 in the Golfweek rankings, and No.4 in the rankings of Golfstat. Iowa is ranked 44th and Michigan is 49th. Northwestern that is ranked 72nd, is in 5th place.

At the Big Ten Women’s Championship, Illinois is in 9th place after day 1.