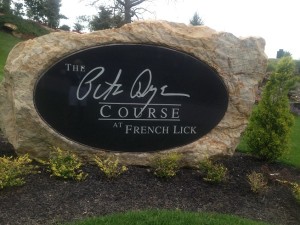 The entrance to the 2015 Sr. PGA Championship.

With less than 30 days left until the first tee shot is struck at the 2015 Sr. PGA Championship, the French Lick Resort is kicking into high gear.

Defending Sr. PGA Champion Colin Montgomerie attended media day on Monday and came away impressed with how well his playing partners played. Say what ! Yes he said that, but added that he likes the golf course and it should play well for his game. He desperately wants to walk into The Golf Club at Harbor Shores in 2016, still carrying the Sr. PGA Championship trophy. 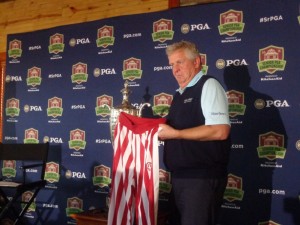 Montgomerie spoke about how much his two senior major titles he won last year mean to him ( won Sr. U.S. Open as well).

Montgomerie had fun telling stories from the tour and some of his history from over the years, that includes five runner-up finishes in majors while playing on the PGA Tour. He even says that as he drives between some of his tournaments, he stops for a bite at both Wendy’s and McDonalds.

When asked about the Ryder Cup, Montgomerie takes pride in never losing a singles match, then of course quickly apologized to the mostly American audience at French Lick on Monday. He earned laughter from all in attendance for that one. 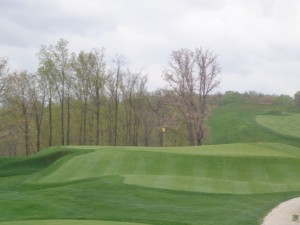 The Par 3, 13th hole, that will play as number 4 during the championship.

Neither Montgomerie or any players in the field will be laughing if they miss the fairways tournament week. The rough is already deep, and if it’s not cut before the championship more that golf balls could disappear.

One thing the players should like is the options they will get around the greens. Many of the green complexes have chipping area’s around them. Putting from off the green couple be a play the players could use on many occasions, the area several area’s that area very much Pinehurst No.2 like. 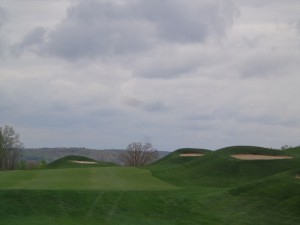 Pete Dye’s Volcano Bunkers on the second hole of the Pete Dye Course.

A unique feature on the Pete Dye Course is found on the second hole, where golfers on occasion will stray into the Volcano Bunkers.

Your senior professionals are not likely to be in them, of course if they do land in one they should be able to get right out of them with no problem.

As legend has it, a few years ago when Dye was riding around the golf course, someone asked him about older players being able to get out of them. Dye jumped up and ran out of the cart and walked into one of the Volcano’s, and then ran back down. Dye decided if he (then in his mid-80’s) could get out of them anyone else could too. Dye’s logic, was that nobody older than him would be out there playing the golf course anyway.

By the time the day was over, Montgomerie was on his way to Branson to play in another Champions Tour event. He departed French Lick hoping for warmer weather in four weeks when the championship is played. It’s likely he will get just that. 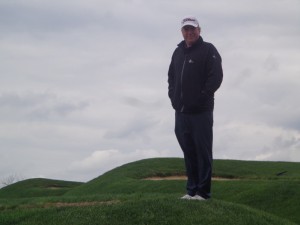 Before it gets too late, are you ready to get tickets, visit Pga.com/srpga. or call (800)-PGA-GOLF. The Senior PGA Championship at French Lick Resort, a major title on the line on Memorial Day weekend in Indiana.

French Lick Resort is home to the LPGA Legends Championship.

Montgomerie after his press conference did confirm that he will not play in the Encompass Championship in Glenview come July, due to a conflict with him playing in the Scottish Open that very same week.