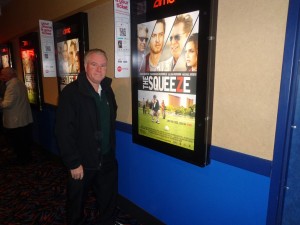 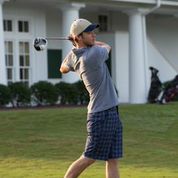 Jeremy Sumpter as Augie Baccas in “The Squeeze.”

Lights, Camera, Action, the Gog Blog ventures into movie reviews for the first time and of course golf is the main reason why.

Coming to theaters on April 17th is the best golf movie to come along in a long time. Whether years from now movie buffs will like it better than the great golf classic movies like Caddyshack, Tin Cup, The Legend of Bagger Vance, Happy Gilmore, or the Greatest Game ever Played, remains to be seen. But I’m sure it will be on any golfers list of the best golf movies ever made.

Jastrow and Archer along with producer Brain McCormack assembled a great cast in putting “The Squeeze” together. Dammed if you do, dammed if you don’t is where actor Jeremy Sumpter, who stars as 22 year old Augie Baccas finds himself, as he gets caught in a squeeze.

Long before the squeeze goes down, the movie starts with Baccas emerging as a golfer with some real talent. Then the challenge for Baccas is whether to go try and win a U.S. Open, or play some high pressure games for serious money backed by high rollers in the gambling world. 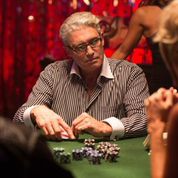 After winning a local tournament, Baccas meets a high rolling gambler named “Riverboat” played by Chris McDonald of Happy Gilmore fame, who has a plan for his newly discovered young talent, that doesn’t include winning a U.S. Open.

While the relationship between the two doesn’t start off the best, and or ever develop that well both Baccas and Riverboat continue on around the country and finally ending up in Las Vagas.

With both Jimmy Diamonds and Riverboat demanding Baccas lose or die, or win or die, in a big stakes match against the newly crowned U.S. Amateur Champion, Baccas and girlfriend Natalie (Jillian Murray) must create a plan to out scheme the schemers.

The movie takes you from courses in North Carolina, across the country to the course at the Wynn Hotel on the strip in Las Vegas.

Reviews from golf greats Jack Nicklaus,” I watched The Squeeze and really enjoyed it, the golf elements are so real you actually believe they could happen.”

Phil Mickelson, “The Squeeze is a wonderful golf movie because it’s so authentic. It hooks you in the beginning and stays interesting right until the end.”

Steve Wynn Chairman of Wynn Resorts, “The Squeeze has the poker scene I have ever seen in a movie. If you like gambling, golf and Las Vegas you will love this movie.”

The fun opening to the movie had me hooked, and the story developed that kept me interested all the way through. The movie is funny, suspenseful, and has enough “action” to keep your interest. Golfers and gamblers should especially enjoy the movie.

Their is a special showing at the Bensenville Theater on March 30th, in conjunction with the Illinois PGA. Starting April 16th, look for a release through OnDemand and Groupon. The Movie hits selected theaters on Friday April 17th. It runs 95 minutes and it is rated PG-13.