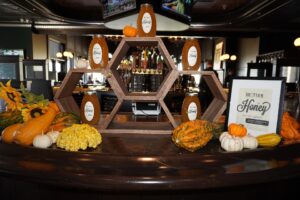 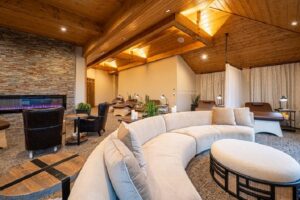 MISTWOOD HONEY IS HERE-get your bottle at McWethy’s Tavern on Renwick Road in Romeoville. Mcwethystavern.com open year round. The NEW Stonedrift Spa at Eagle Ridge in Galena is open. More space-new services and products. See Eagleridge.com.

Alison Basseto of Naperville won the championship on the General Golf Course with a three round total of 233. DeAnne Stolarik of Zion was second and Ellen Martin was third. There were also winners in the A,B,C, D, E, F, G, H flights, for the full recap visit Iwga.org. The IWGA thanks the resort for hosting the championship. 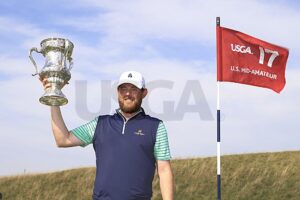 The 2022 USGA Mid-Amateur at Erin Hills was quite a success.

Because both champion Matthew McClean and runner-up Hugh Foley made the final match, where McClean defeated Foley 3 & 1.

But even more interesting was that both finalists are from Ireland, McClean from Belfast and Foley from Dublin.

McClean with his win, earns a spot in the 2023 U.S. Open, and likely will receive an invitation to the 2023 Masters Tournament. Both McClean and Foley are friends and flew over from Ireland together on the same flight to play in the championship. They shared housing and rental cars upon arriving in the USA.

The championship ended two days late, due to heavy rains on Day 2, that spilled into Day 3. So the 36-hole was played over 2 days, something not normally done. But after a really long week McClean said,” it really hasn’t sunk-in yet but it will tonight.”

McClean entered the championship with a World Golf Rating (OWGR) of #120 in the amateur rankings (Foley at 195). But after a late charge by Foley, McClean wrapped up the title, with a solid approach shot on the 35th hole with a 7-Iron. Because Foley had missed the green and could not get up and down.

For a full list of what the champion receives, please visit USGA.org. 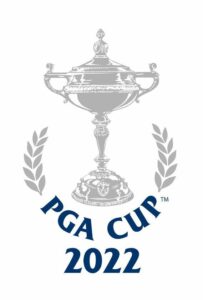 THE 2022 PGA CUP from Surrey England.

The PGA Cup started in 1973 in Pinehurst, and this win by the USA was it’s 19th, in the series of matches.

The USA Team had a 4 point lead heading into the final singles matches. The USA set the tone in the first match out, when Michael Block who was 4 DN after 12 holes. Made birdies on five of the last six holes, to win the match 1 UP. Whaley said that win “set the tone for US.”

The clinching point for the USA, was recorded by PGA Life member Omar Uresti who defeated Simon Lilly 4 & 3. But for the full results, visit PGA.com