THE GENERAL AT EAGLE RIDGE RESORT & (NEW) SPA WILL HOST THE 25TH Anniversary tournament of the General Golf Course, first opened in 1997. The Roger Packard-Andy North design is still a 5 Star Course and one General Grant would have enjoyed. Sign-ups are still being taken until 10 AM tomorrow. Visit EagleRidge.com 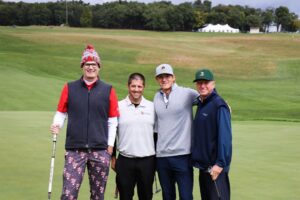 THE STRETCH DRIVE IS HERE.

As we roll through the start of October it’s hard not to notice that the end of outdoor golf season here up north is getting close to ending for 2022.

Because many Chicago area courses, are getting close to closing, and now anytime Mother Nature drops the snow bomb or really cold temperatures for a few days on us. The courses will close.

Because of how busy courses have been the last few seasons, it seems that many area courses will not be chasing the extra few dollars late in the year. So don’t expect many courses opening-closing-reopening and closing again. So unless the weather is really good past Thanksgiving and into early December, there will not be many open courses to choose from.

BUT WEATHER PERMITTING there will be some Turkey Trot tournaments and Black Friday events. So stay tuned.

HURRICANE IAN really dropped a bombshell and plenty of water in various places in Florida a few weeks back. But many of the clubs are starting to reopen. Resorts like Innisbrook, Doral and Streamsong have reopened and are welcoming back the guests.

But the closer one gets to the Fort Meyers area, reopening’s could take month’s in some cases. All of us at Golfers on Golf wish a speedy recovery to all the golf courses and people who live in Florida.

IT WAS SAD TO HEAR of the passing of Dave Mueller who was part of the McDonald-Mueller family that owned courses like Rob Roy in Prospect Heights, and Chapel Hill in McHenry, plus Crystal Woods in Crystal Lake. I worked with Dave for years at Rob Roy and his father the late Jake Mueller gave me my first job, and first job in golf at the Rob Roy driving range. But while it was only $2.00 an hour picking and cleaning range balls. It started me towards working in the business of golf where I still am today. Condolences to Dave’s family and friends.

I AM really excited for this Wednesday’s 25th Anniversary tournament of the General Golf Course in Galena-at the Eagle Ridge Resort and Spa-new spa is coming FINALLY at the end of the month.

THIS TOURNAMENT will be fun. Because of contests on every hole. There will be long drives, closest to the pins, on par-3’s and par-5’s in three shots. I will be one of the returning players, who played 25 years ago in the Grand Opening of the General tournament.

THE KEMPERSPORTS Invitational at the Glen Club was last week. But kudo’s to two of my teammates from last year, who went on two win again this time. Former Daily Herald writers Joe Aguilar and Barry Rozner won, after being paired with Steve Olken and Walter Lis. So while my attempt for a 3-peat did not happen. Seventh place was not all bad either.

HALTOM-OLIPHANT GOLF that manages several courses in Wisconsin. Did recently host the famed (William) Langford Shield event on the Lawsonia Links course. The two player team event is really fun, and the post round food is even better. Craig Haltom who found the land now known as Sand Valley, and his team put on a great event. My partner Patrick Crampton and I managed a 16th place finish out of 54 teams.

Lawsonia’s Links Course is rated 23rd on the Classic Course Top 100 list (Golfweek). But what’s not to well known is much about the second course there. The Woodlands Course which was recently renovated, was designed by Rocky Roquemore. Roquemore did the  restoration work at Pine Meadow for the Jemsek’s in the mid -1980’s.

NICK HARDY-KEVIN STREELMAN AND DOUG GHIM all had nice weeks at the Shriner’s tournament on the PGA Tour. Streelman led the way with a T-20, then it was Hardy followed by Ghim further down the leaderboard. But at least all three made the cut and got a check.

THE NEXT COUPLE DAYS should see some nice weather. So get out and enjoy some outdoor golf while you can. Because sadly, the end of outdoor golf season is sneaking up on us.