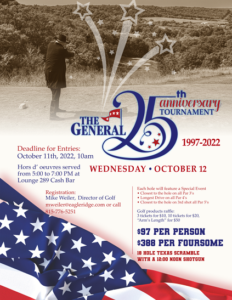 The Generals 25th Anniversary tournament at Eagle Ridge in Galena.

THE FALL GOLF SEASON IS HERE.

SORRY TO HAVE BEEN AWAY. But there has been plenty to do in recent weeks. Because fall golf season is kicking-in, I will start playing catch-up in the days ahead.

I am also going to try and get some golf in before the season winds down to a close.

Today is the KemperSports Invitational at the Glen Club in Glenview. As part of the team that is a 2-time defending champion, I’m looking forward to going for the 3-Peat, after coming off a good showing last week at Lawsonia.

THE GENERAL ANNIVERSARY TOURNAMENT at Eagle Ridge in Galena. This is setting up to be one of the best outings of there year, a tip of the cap or golf visor to Director of Golf Mike Weiler and his team for putting this together.

I am looking forward to playing in this, after being one of the original players in the Grand Opening event in May of 1997. The four man scramble tournament, was won by a team that had Sandra Fulmer, who won the putt-off playoff in the bar of the General Clubhouse, over Jan Wannstedt the wife of then Bears Coach Dave Wannstedt. So If I recall correctly 9 under par won the event. So can your team take it lower this year. I hope my group can.

IT’S ONLY $97 to play, and there are contests on every hole, food and drinks afterwards. 25 years ago a cannon fired to signal the start. But even with no cannon this time, the event will be a blast. EagleRidge.com.

NORTHBROOK’S very own Nick Hardy an Illini-guy had T-6 finish past weekend at the Sanderson Farms PGA Tour event. Hardy will be able to pay the bills for a while, after earning just north of $280K. Well played Nick.

THE LIV TOUR gets back into action for the first time since Rich Harvest Farms next week in Thailand. I wonder if they can break the RHF attendance records. As far as the legal side of things go, I wish both sides would get together and create a schedule that would knock everyone’s socks off.

DUPAGE GOLF is holding it’s sinister “Rambo Scramble” on Saturday October 22nd at Maple Meadows Golf Club in Wood Dale. But be ready to play in any weather. Because rain or shine, this event will tee off as scheduled. Because the deadline is approaching sign up now at DuPagegolf.com. 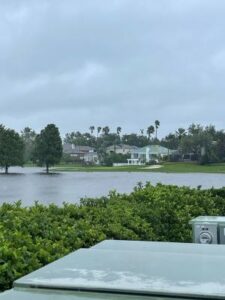 Was not nice to many places in Florida last week. Arnie’s Place Bay Hill was hard hit.

So I’m sure it will take some time for the dry-out to take place, and the always great course conditions to return.

But courses in the Fort Meyer’s area were harder hit, and will take a longer time to reopen.

So hopefully they can by the time the rush of snowbirds starts heading south for the winter.

Innisbrook Resort in Tarpon Springs north of Tampa, and Streamsong Resort were not hit as hard. So they will be open shortly.

The Gog Blog will be back this week. RS