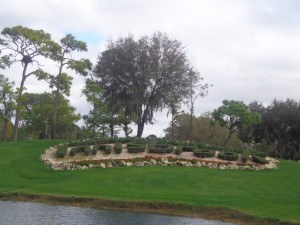 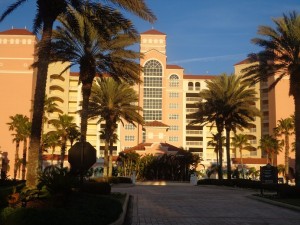 There are plenty of choices to pick from when you look for resort golf in Florida.

But one property you should pick is the Ocean Hammock Beach Resort in Palm Coast just south of St. Augustine on the east coast of the state.

While there are numerous golf resorts to pick from, not many can offer both ocean views from your room and from the golf course.

Ocean Hammock is the home to 36 holes of golf and you can’t go wrong with either golf course, both offer great challenges to test your game while still being fun for golfers of all levels. 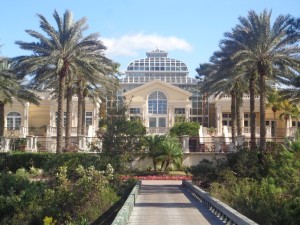 The Clubhouse at the Conservatory Golf Course, that will host the Big Ten Match Play Championship this coming week.

The Conservatory Golf Course is a Tom Watson design, is located a few miles from the hotel but is an easy drive over from the resort. If only your drives on the course were as easy to hit.

Shortly after the club opened in 2004, it hosted a fall series event for the PGA Tour. Now the Big Ten is coming in with it’s spring season match play championship. the No.1 team in the country Illinois will be the top seed.

The golf course challenges all aspects of your game. If you find it on a windy day it can be rough going. While the rough wasn’t deep, the fairway bunkers can be. If you want a tip from the club’s professional, it’s a simple one. Stay out of the fairway bunkers.

One of the fairway pot bunkers on the Par 4, second hole.

Watson’s love of the British Open show’s here at the Conservatory with his use of the pot bunker. Not all of them are flat either, some sit up in air or on mounds or slopes.

The fairways have plenty of mounds and slopes, much like what is found on courses in Scotland or Ireland. Golf courses with that look, are often played with a bump-and-run game mostly found on windy days. Something that you could find on your next round at the Conservatory.

Standard fairway bunkers found on early on the back nine.

The tenth hole is one of the most interesting par 5’s you will ever play. To put it mildly, there is plenty going on there.

A rolling fairway, full of mounds and bunkers, both sand and grass will leave golfers looking for that spot where they can get a flat lie. But one other thing that stands out is the routing of the “cart path”. That path is the bunker that runs across in front of the green. Long large waste bunkers run through out the course, especially on the back nine where you drive carts right through the bunkers on several holes.

The Conservatory can play a lengthy 7,776 yards from the back (Black) tees. There are six sets of tee’s with front tee’s playing from 5,235. The Black tee rating is 78.2 and with a slope of 150. The course has been ranked several times, by a variety of national golf publications over the years.