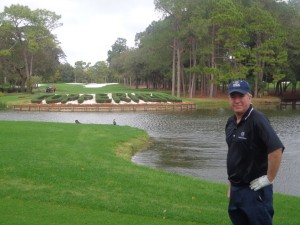 Golf season has teed off and it has arrived just in time. Yes it was great to take 10 weeks off thanks to the start of winter.

After opening the season at Kinderlou Forest Golf Club in Valdosta Georgia, it was great to spend three days around the PGA Show. I will have numerous features in the days ahead from the show, about the products you will see on the shelves of your favorite golf shop in the upcoming days and weeks ahead.

I spent three days at the PGA Show. One day was the demo day at the Orange County Golf Center, and then two days on the convention floor. It was there I reconnected with some show friends of past years and found some new ones as well. Stay clicked in for the all the details.

Part 2 of this trip is to spend some time visiting the resorts you should consider when you want to golf away (from the home area that is). One of the first features will be another edition of great golf on a cold day. My first round after the show was in Naples where the mercury hit 83. What I found is one of the best courses in Florida, the Calusa Pines Golf Club. It’s not your normal looking Florida golf course. A tip of the cap or golf visor to ownership for encouraging all golfers at the club to walk.

This weekend I’m checking out the Innisbrook Golf Resort in Palm Harbor. In about 7 weeks the PGA Tour will arrive here with the Valspar Championship. Both Luke Donald and Kevin Streelman have won here in recent years. The championship is played on the resorts Copperhead Course, which was already getting ready for the tournament. 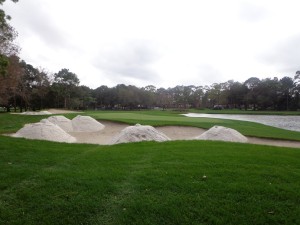 The new sand has been dropped in the bunkers on Copperhead.

The new tour white bunker sand has been dropped in the all of the courses bunkers. but not all of the bunkers have had the sand ranked into position yet.

The course got almost 1 inch of rain last night and into the early hours of this morning, so the greens were not really rolling at tour speed when i played the course. The players that win here will have a precision game, tight fairways are the norm here. Yes a tree removal program would help the course improve on a few holes and there is room to do that, without taking away the bite of Copperhead. The Snake Pit holes 16-17-18 will test the best golfers. Tomorrows round is the well liked island Course here, full reviews coming soon.

Then it’s over to the East Coast and the Ocean Hammock Resort in St. Augustine, before heading up to the Carolina’s both North and South. 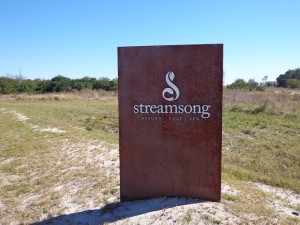 Streamsong is ready to build the new Black Course, to go along with the Red and Blue Courses.

In between the Tampa and Orlando area’s and just south of Lakeland Florida sits Streamsong.

The hot new property of 2013 is back in the news again. Joining the Ben Crenshaw and Bill Coore designed Red Course, and the Tom Doak designed Blue Course. Will be the Gil Hanse designed Black Course that should open in late 2016 or early 2017.

I would bet it’s open by the the PGA Show rolls in to the area in January of 2017. Could there be a fourth course, bet on it to appear down the road somewhere. New course construction, yes that has a great ring to it.

The Gog Blog is touring Florida, stay clicked in or better yet, jump on the plane or get in the car and head south. It’s time to launch your golf season. Come and Play. RS