The Award winning domes in the Chicago area. Links and Tee’s in Addison on Lake Avenue and the Buffalo Grove Golf & Sports Center on McHenry Road. Customer Appreciation Day at L & T’s on Jan. 31st and at BG Golf and Sports Center on Feb. 7th. See addisonparks.org or bgparks.org for more information. 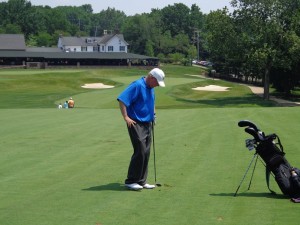 It was one of those days

It was one of those days, that hurt’s more than a bad shot on 18, like me (left) on day last summer.

The first day at the PGA Merchandise show is usually a fun one, and there were some great moments. Catching up with people like Mike Davis of the USGA,and Scotty Cameron the putter creator from Titleist.

Their was plenty of media friends and golf industry people that it was good see again. The problem was the one friend I won’t see again. No sooner had I started roving the main floor of the convention center, my phone rang and I got the news. The reports were out that another one of my good media friends had passed away.

The Daily Herald’s Mike Spellman one day short of his 51st birthday had suffered a heart attack, and was taken from us too soon. Just like last year when the Herald lost Tim Sassone, you see Spellman took over the Blackhawks beat when Sassone passed. Spellman barely had time to get his skates sharpened on the beat when a higher power came calling. A heart attack we hear is why.

Spellman was more than just the new Blackhawks guy, he could do it all and that’s why the DH had him help out on the all beats when they needed someone to step in. Baseball, Hockey, Hoops, Football, Arlington Park and the golf tournaments. He was everywhere.

As a result, I spent many years sitting next to or close to Mike in press boxes or press tents all over town. Spellman just like Sassone and WBBM’s Eric Brown who we lost last year, were among a group of the Chicago sports media you just enjoyed being around everyday at work. It’s people like them who helped make the long days on the job more tolerable.

Spellman covered golf as well, we teed it up at a few media days together over the years. Just last Friday night somebody patted me on the back in the Hawks press box, it was Mike, he was walking by and wanted to say Hi. He knew I was getting ready to depart for this trip down south, and I know he was wishing he could join his fellow DH writer Len Ziehm and I here in Florida for the show and some golf.

In 2010 during the PGA at Kohler, Spellman and both commuted home some nights instead of staying in Wisconsin all week. One night we took turns passing each other on 94 all the way back home. This year the PGA will return to Kohler, again I won’t be staying up north every night all week.

That drive home will seem a little different this year. So will the next Blackhawks game I cover to when I get back from Florida. I know that on those nights, I will be thinking about another friend lost sooner than should be the case. RIP Mike, you will be missed.