The Buffalo Grove Golf & Sports Center has won a 2014 GRAA, Award. The best dome in Lake County to work on your game all winter long is open 9 Am to 10 Pm, Monday-Friday with prices from $11 for 30 minutes before 6 PM. After 6 PM or on weekends the rate is $12 per 30 minutes. Weekend hours are 7 Am to 10 Pm on Saturday, and 7 Am to 8 Pm on Sunday. BEST BARGAIN $85 for the 5 hour punch card. Customer Appreciation Day Saturday Feb. 7th from 11-2 Pm, club manufacturers, raffles, contests and more. 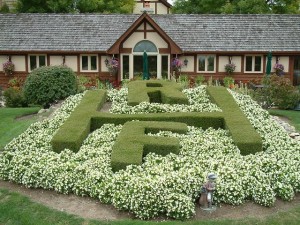 The NCAA has announced that Northern Illinois University and Rich Harvest Farms will host the 2017 NCAA Men’s and Women’s National Championships.

During an interview with Golfers on Golf, Rich Harvest Farms owner Jerry Rich admitted to becoming, “a little emotional ” when he got the news of being selected. Rich said he had being making phone calls and speaking with NCAA committee people for 15 years, trying to host the national championship. So it seems only fitting, that the call he had been waiting so long for, came in 2015.

This will mark the first time NIU will host an NCAA Championship in any sport since becoming a major college program in 1969. The women’s championship will be played first, May 18-24 in 2017. The following week the men will play from May 25-31. 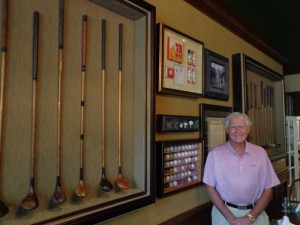 Jerry Rich with part of his golf collection at Rich Harvest Farms.

Rich Harvest Farms has been part of Golf Digest Magazine’s Greatest 100 Courses for over a decade. The course will host the 2015 Palmer Cup championship this June, followed by the WGA’s Western Amateur Championship in August.

In 2016 the UL International Crown a global event in women’s professional golf will be held at Rich Harvest Farms.

“It’s a wonderful opportunity to showcase Northern Illinois University and our partnership,” said Rich. ” NIU hasn’t yet had the honor to host an NCAA Championship for any sport so we are thrilled to be part of this moment in NIU history. It’s been a passion of mine to nurture amateur golf. As an NIU alum, it is more special that I can offer up my golf course for this event.” 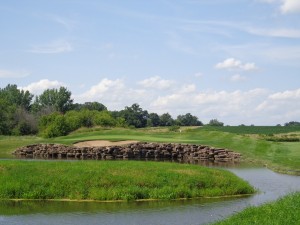 NIU and Rich Harvest Farms have been hosts to the 2007 and 2014 NCAA Central Regional (won by Illinois in 2014). The 2003 and 2013 Mid-American Conference Men’s Golf Championships (MAC Conference) and the annual Northern Intercollegiate tournament.

“Bringing this championship to our home course will have a tremendous impact on NIU Golf,” said NIU Huskies, Director of Golf Tom Porten. “It is particularly gratifying to see the long-time support of NIU alum Jerry Rich and his passion for growing the game through college golf, recognized. We have a strong partnership and look forward to showcasing college golf’s best in the spring of 2017 at Rich Harvest Farms.”

The excitement of hosting the championship at Rich Harvest Farms hasn’t been lost on NIU women’s coach Kim Kester.

“It’s exciting to add the NCAA Golf Championships to the list of the top national and international events that have been played or are coming to Rich Harvest Farms,” Kester said. “The course is really a hidden gem in the Chicago area, and I’m excited about the opportunity to expose the rest of the country to the course we get to use every day. We’ve seen great support for the college and international event’s held at Rich Harvest Farms, including the NCAA Regionals and the Solheim Cup. This event is not only the ultimate showcase event in college golf, but fans will see many future professionals in action.”

Click here, to hear the Interview with Jerry Rich on receiving the 2017 NCAA National Championship at Rich Harvest Farms, with updates on the other events coming to RHF.

“Rich Harvest Farms is looking forward to bringing out the best collegiate golf teams in the nation and watching the future of professional golf emerge,” Rich said.

The NCAA announced that the 2016 site  for the national championships would be Eugene Country Club in Eugene Oregon, home of the Oregon Ducks.

It was expected that the 2018 site might also be announced by the NCAA, and the French Lick Resort in southern Indiana would be selected as well. So far that announcement has not been made.

Join teaching professionals Jeremy Anderson and Jon Williams for classes on golf fitness and performance. Clases are two sessions and run 90 minutes each, dates are Feb. 4 & 11, and again on Feb. 18 & 25. The Buffalo Grove Golf and Sports center. Call (847)-459-2321, located at 801 McHenry Road.

Rich Harvest Farms is a private club owned and built by Jerry Rich. The golf course is 18 holes and and built through an area of 1,820 acres that comprise the entire RHF complex.

For more information on Rich Harvest Farms,please feel free to visit the clubs website at Richharvestfarms.com.

This marks the third time an area golf club has been selected to host this event. Olympia Fields was the first club in the are to host. It was followed by Conway Farms in the early 1990’s, only a couple of years after the club was first opened.