NOW IS THE TIME TO GET YOUR GOLF GAME READY FOR 2022. So go visit the Schaumburg Golf Club at 401 North Roselle Road. Practice in the simulator, get the needed supplies in your new golf bag. Chow down at Chandlers Chophouse, some of the best burgers in Schaumburg. Visit SchaumburgGolf.com or call (847)-885-9000.

THE GOG BLOG by RORY SPEARS, Director of Content and Creation for Golfers on Golf. Follow Rory on twitter @GogBlogGuy, or connect with him on LinkedIn/Facebook. 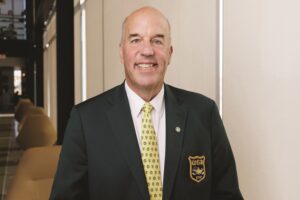 The Western Golf Association (WGA) has announced that Joe Desch has started his two-year term as Chairman.

Desch grew up caddying at the Dayton Country Club, and became an Evans Scholar, he attended Miami University.

“I’m honored by the opportunity to lead the WGA, an organization that has been a significant part of my family’s life,” Desch said. “It has not only been transformative in the lives of countless young men and women, but also in the game of golf. Our prestigious championships are best-in-class, and the Evans Scholars Foundation continues to provide life-changing opportunities for thousands of caddies, just as it did for me and my brothers.”

Desch has been a WGA director since 2001, and has been the WGA State Chairman in Ohio, and led some 50 WGA Directors in raising funds, awareness and caddie opportunities across the state.

During an interview with Golfers on Golf that covered a variety of topics, Desch made it clear the WGA will continue to be a more diverse organization as it moves forward and continues to expand. In recent years the WGA had a strong push to reach the goal of 1,000 caddies a year attending college. But now that that goal has been reached, what’s next.

Desch described the next long term goal as 1,500 caddies, a number the WGA expects to reach by the end of the decade. But the challenge is not just getting the caddies into college. But it’s putting them together under one roof in an Evans Scholars House, on the campus they attend.

What campus will that be ? Desch explained there are schools the WGA is in contact with to be the next schools to welcome the WGA and the Evans Scholars. But the days of just sending Evans Scholars to Midwest Big Ten schools are fading. Because the WGA will be making it presence felt on the East Coast, the West Coast and across the country.

The WGA runs golf championships, not just the BMW Championship on the PGA Tour Tour. But amateur tournaments as well. Now under the WGA’s umbrella is the Women’s Western Golf Association (WWGA). Desch would like to see WWGA champions get exempted into events like the USGA Women’s Amateur, and the Augusta Women’s Amateur, where the WGA is working to get 2021 WWGA Amateur champion Marissa Wenzler exempt into the Augusta field.

USGA CEO Michael Whan grew up golfing with Desch in Ohio, after Whan’s family moved there from Naperville Illinois. So Desch is hoping for a new level of the USGA and WGA working together, for the betterment of the game.

Desch is excited about the new level of commitment from BMW during the WGA’s PGA Tour event. The WGA is now working towards a possible WGA/LPGA event. This would expand the WGA’s reach into women’s professional golf.

During Desch’s next two years as WGA Chairman, he will lead the drive to pay it forward. As the Western Golf Association continues to move forward.