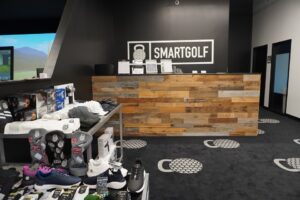 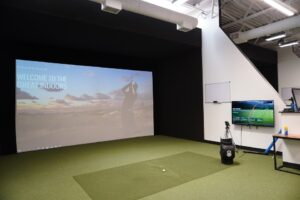 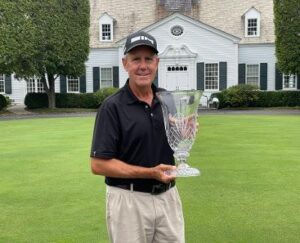 ROY BIANCALANA (Blackberry Oaks) hung on to defeat Doug Bauman  (Biltmore Country Club) in a back and forth championship match, 2 & 1 to win the 2021 Illinois Senior Match Play Championship, contested at Shoreacres.

But by doing so, Biancalana earned a second prize on the day. Because the points earned for the the senior major championship, earned Biancalana the 2021 Errie Ball Senior IPGA Player of the Year Award.

“I didn’t hit my irons well at all this week,” said Biancalana. ” I found something on the 14th hole in the Championship Match, and was able to pull it together at the end. I’m most proud of how I hung in there without having my A-game. I tend to get down on myself when I’m not playing the way I can. But I didn’t do that.”

Biancalana started the championship with bye and a number two seed, by being second in the points race entering the years next to last championship. Next week the final IPGA Senior event will be held at Beverly Country Club. As the Senior Players Championship will wrap up the year.

The path to victory for Biancalana started with a 1 Up win over #31 seed Tim Troy (Zigfield Troy Golf Club). Biancalana won two matches on Tuesday. First in the morning against #15 seed Mark Woodcock (The Village links). In the afternoon Biancalana won his quarterfinal match 7 & 6 over Dave Erickson (St. Andrews Golf & Country Club).

But the semifinals were a little tougher for Biancalana. After taking a 3 Up lead through 11 holes over Kevin Healy (Black sheep Club). But Healy won holes 12 and 13 to trim Biancalana’s lead to 1 Up. But after five straight halved holes, Biancalana won the match 1 Up.

In the championship match against Bauman, Biancalana went 1 Up after the first. But after trading pars for the next eight holes. Biancalana was still 1 Up at the turn. Then Bauman rallied by winning holes 10 and 11 to take the lead. Biancalana had to make a good par save on the 13th hole, to keep Bauman’s lead at 1 Up.

But Bauman missed the green on the par 3, 14th and could not get up and down for par, and the match was tied again. But Biancalana made birdie on the par 5, 15th hole to regain a 1 Up lead. After a poor tee shot by Bauman on 16 that forced Bauman to hit a second tee ball. When Bauman missed the green with his fourth shot, and Biancalana sitting in close for birdie, the hole was conceded.

When both players made par on the 17th hole, Biancalana emerged a 2 & 1 winner. For Biancalana he became the Illinois PGA Senior Player of the Year winner for the third time in four years. More details at IPGA.com.