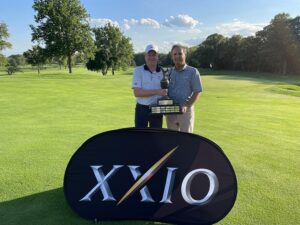 Britt Pavelonis (Carbondale) is the winner of the 2021 Illinois Senior Open, at the Flossmoor Golf Club.

Pavelonis shot a 36 hole total of 6-under par 138, to win his first Illinois Senior Open by 3 shots over amateur Mike Henry of Bloomington.

Pavelonis ended the first round in a four-way tie with three other players at 4 under par. But day two was a different story, trying to stay in contention.

” I just tried to make some putts today,” said Pavelonis. “I didn’t really make anything in the first round, but I two-putted for birdie three times in round one. Then I made four birdies on four par fives. I just couldn’t sneak anything in the hole. Today, I played solid except for the eighth hole, which was just a little hiccup. I came right back with a birdie on the ninth hole. But I just felt like I was hitting the ball well and giving myself a chance to make putts on almost every hole.”

While he did keep score, Pavelonis did not look at the leaderboard until the 12th hole. 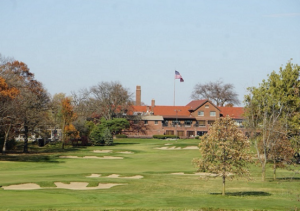 Dukelow made a short-lived charge inn the middle of the round. Because with birdies on the ninth and tenth holes, Dukelow briefly pulled back even with Pavelonis for the lead.

But Dukelow fell back off the lead for good, by carding birdies on the par 3, 13th hole, and the par 4, 17th hole.

Roy Biancalana (Blackberry Oaks) and John Wright (Aurora IL.) (a) tied for Dukelow for third place. Finishing at (142) two under par for the championship. Biancalana shot a 3 under par 69, in round one to be just one shot off the lead. But his 1-over par 73 in round two never allowed him to challenge for the lead on the final day.

Pavelonis says he will play in both the Arkansas and Texas Open’s, as he prepares for the PGA Tour Champions Q-school. See a full scoreboard at IPGA.com.