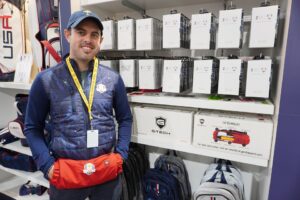 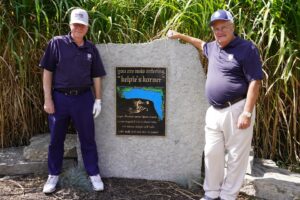 THE 2021 ILLINOIS GOLF HALL OF FAME INDUCTION DINNER was held last night at the Glen Club in Glenview. By Rory Spears, Director of Content & Creation for Golfers on Golf. Follow Rory on Twitter @GogBogGuy or connect on LinkedIn and Facebook. 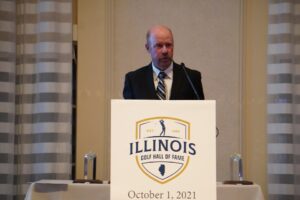 Six members being inducted at once is one of the largest classes of inductees at any one time. The Illinois Golf Hall of Fame has been operating since 1989.

Illinois Golf Hall of Fame Chairman Tim Cronin announced that “The Hall” now has 97 members. But in two years the number of inductees will finally reach or exceed 100. 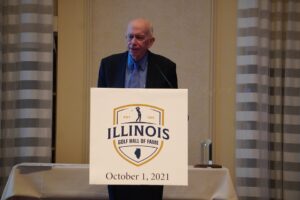 This years Class of 2021 inductee’s included.

GARY PINNS: Is the all-time leader with five wins over three decades of the Illinois Open. But Pinns won the Illinois Open as both an amateur, and a professional. He is a past winner of the IPGA teacher of the Year award in 2014.

PHIL KOSIN: The publisher of Chicagoland Golf and creator of the Illinois Women’s Open. But Kosin was also a radio host, hosting his golf show on four different radio stations. But two of those stations included WMVP-1000 and WSCR 670. Kosin’s widow Kathy Rachick accepted on his behalf.

MASON PHELPS: Won the Western Amateur twice (1908-1910), and played golf in the Olympics. But Phelps was also a semi-finalist in the 1909 U.S. Amateur. Phelps daughter and grandson Rob accepted on his behalf.

HERBERT JAMES TWEEDIE: Learned trade of being a golf course architect at Royal Liverpool. But after arriving in Chicago he designed almost two dozen course in a short span of years. Some of those clubs included Park Ridge, Flossmoor, Midlothian and Skokie. Tweedie’s great grandson James Tweedie accepted on his behalf.

JIM “DOC” SUTTIE has been a three-time winner of the Illinois PGA teacher of the Year winner. Suttie won the PGA National teacher of the Year award in 2000. The Northern Illinois University alum was among the first teachers to start using video to teach his students. Numerous touring professionals have worked with Suttie over the years.

The next Illinois Golf Hall of Fame Class will be 2023. So for more details see IPGA.com.