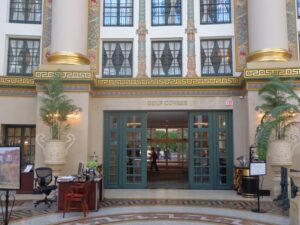 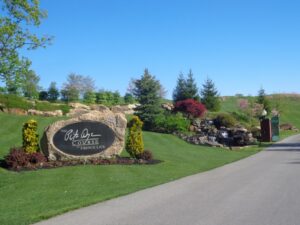 THE GOG BLOG by RORY SPEARS, Director of Content and Creation for Golfers on Golf. Follow Rory on Twitter @GogBlogGuy or connect with him on LinkedIn/Facebook 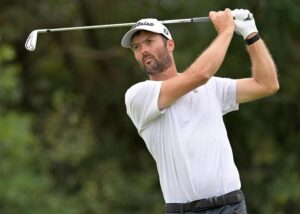 Skokie Country Club’s Garrett Chaussard hits a shot in Round 2 of the IPGA Section Championship at Ivanhoe. Photo courtesy of IPGA and Nick Novelli.

ROUND 2 is NOT Over.

But most of the leaders finished before the second and final delay of the day, struck the Ivanhoe Club.

First Round leader Frank Hohenadel is two shots back and the final player under par at -1. Hinsdale head golf professional Matt Slowinski sits alone in 5th place at even par, after a second round of 70 (-2). Slowinski is not out of it. Streng’s morning round of an even par 72, has him in the mix for his first IPGA Major win.

But the story of Round 2, besides the weather was Chaussard, whose 2 under par (70) left him at 3 under par for 36 holes. Chaussard will play in the last group with Streng and Mickelson, unless Hohenadel makes a push over his last three holes he has to  finish.

CLICK HERE, AND HEAR FROM LEADER GARRETT CHAUSSARD and Andy Mickelson who is in second place.

30 players did not finish round 2. Several more that would not have made the 36 hole cut, have withdrawn from the championship. Because the cut as of now is at +15, some players around the cut line will finish on Wednesday morning.

The morning flight was able to get out on the golf course before the afternoon temperatures hit 93 degrees. But at 4:27 Pm local time, lightning was detected and play was stopped. The players were sent back on the golf course at 6:20, after a nearly two hour delay. 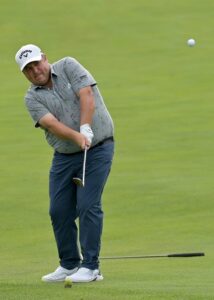 Speaking with the media around 6:50 Pm, IPGA Executive Director Carrie Williams said the stoppage of play horn would sound in about 7 minutes. While daylight wasn’t the issue, Williams said a second rain front was closing in. But the IPGA wanted the players to be able to finish any hole they were currently playing, before having to quit for the day. About 15 minutes later the front Williams spoke of arrived. When it did, heavy rain started to fall.

Chaussard came right out of the restart with a birdie on the 16th hole. But to maintain his one shot lead, he made a tough 8 foot par-saving putt on the 18th hole. Mickelson emerged from the delay, with par’s on 15, 16, and 17. But a ten foot missed par putt on 18, left him a shot behind Chaussard.

13 time winner of the section championship, University of Illinois Men’s golf coach Mike Small had just made eagle 3 on the par 5, 15th hole when the horn sounded. The eagle left Small tied for the lead. But after the restart, Small played holes 16-17-and 18 in Double Bogey-Bogey and Quad Bogey. Small starts the final round now 7 shots off the lead.

Ivanhoe that has played fast and firm for most of the first two days, will be a little wet when play resumes on Wednesday.