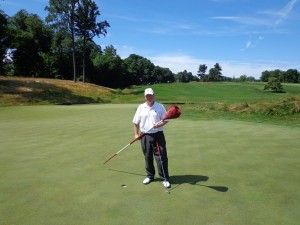 BY: Rory Spears, with the Wicker Basket at Merion.

In October I played Shinnecock Hills and it’s very good, I thought going in it might be my new No.1 when I finished the 18 holes there but it had to settle for No.2. Regardless both courses are very good, and a must play if you ever have the chance to play there. Both courses test your game in ways you don’t see everyday. You don’t have to play the tips at either course to have your hands full.

I had the chance to play several top courses this year, and each test of golf was more exciting than the next one. If you haven’t taken the time to play a real top course in 2014 or even ever, make 2015 your time to do so. You will be glad you did.

When it comes to playing top courses, you do have choices. There are several public courses that have or will host U.S. Opens.

There are some ways you can play a championship private club. If you don’t know a member, or have a business contact, find a top club that supports a charity close to your heart and pay the extra bucks to play. Maybe you can just find a good charity that could use the support.

You can always visit Top 100 lists from various publications, and play courses that are on these lists. Even if they have not hosted a major or a PGA Tour event, most of them are very good golf courses.

As 2014 comes to a close, I’ll start planing where I want to play in 2015. I’m looking forward to adding some courses to my list of courses I have never played before. My number of courses played is close to 450 in some 37 states. While it’s nice to play courses you know very well, it’s nice to play new challenges. As somebody once said, variety is the spice of life.

Addisonparks.org The golf dome is open, go practice your game.

I’ll return on Wednesday to wrap up 2014 and over the first few days of 2015 I’ll have some thoughts about the year ahead. Both local picture and on the national scene.

If you got new clubs for Christmas, go hit the domes and start breaking them in. If you have gift cards from golf stores, it’s time to go visit, test some clubs and or get fitted.

If you want to test some clubs first, start looking for the demo days at the area’s domes. Sometimes you can get great deals if you buy at demo day, do inquire.