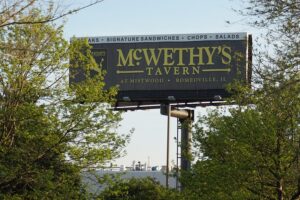 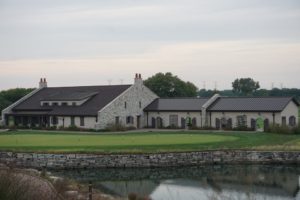 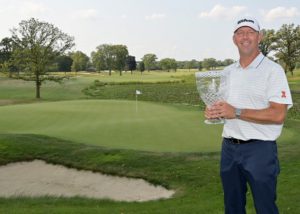 University of Illinois Men’s Golf Coach Mike Small, has won the Illinois PGA Section Championship 13 of the last 16 years, including in 2020 at Medinah. Small among the 1st round leaders at Ivanhoe in Round 1.

REPORTING FROM THE IVANHOE CLUB.

Team Mistwood Golf Club is back in the mix at the Illinois PGA Section Championship.

But the University of Illinois Men’s golf coach could not be caught on Medinah’s Course #1, winning for the 13th time in 16 years. This year it’s Small that is lurking after the two Mistwood pro’s as Hohenadel’s 3 under par 69, is the first day leader. Mickelson and Small are T-3 two shots back at 1 under par, after posting 71’s. Garrett Chaussard of the Skokie Country Club shot 71. Chaussard has been in the IPGA Match Play Championship finals the last four years, and was in contention through 45 holes at this years Illinois Open.

BUT COMING IN LATE was Wildcat Academy professional Tim Streng. Streng was the only player in the field from the afternoon flight to shoot under par. Streng carded a 2 under par 70. His birdie on the 9th hole, his 18th hole, came by playing the par 5, with 5-iron, 7-iron and wedge into the green.

THE LEADERS all said the Round 1 set-up left them hitting driver only twice all day. But that could change in Round 2. 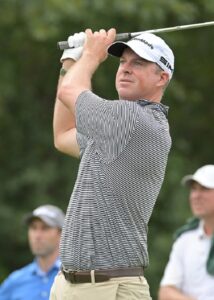 Mistwood GC Frank Hohenadel leads by 1 after Round 1.

ACE IS THE PLACE in Round 1. The 187 yard par 3, 17th hole yielded not one but two ace’s in the morning flight. Brian Dalton of Stonewall Orchard GC, made it two years in a row with a hole-in-one at the section championship. Dalton who made an ace in 2020 in the final round at Medinah Country Club, did it again this year, using a 7-Iron from 187. But Dalton ended up the round with a +5 score of 77.

TWO FOR ONE as this time Dalton had company in the ace competition. Because Doug Bauman from Biltmore Country Club a two time past champion in 1996 and 1997, recorded the days second hole-in-one also on the 17th hole. Bauman’s 187 yard shot was struck with a 6-iron.

“I knew I hit it good,” said Bauman. “The ball hit about six feet in front of the cup. Since I was playing with Jim (Sobb-Director of Golf and host pro from Ivanhoe) there was about nine members out watching us. But when they all started jumping up and down and clapping their hands. I knew it was in.” Bauman a two-time past champion in 1996-97, carded a 77 (+5) for his opening round.

The players all agreed the course was playing tough. Which was proven when the scoring average for the day was sitting at just over 79.0.

The cut will be made after Tuesday’s second round.  Golfers on Golf will cover all three rounds of the IPGA section championship.