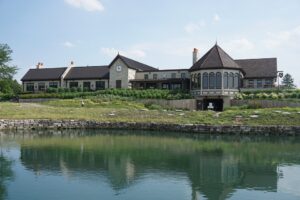 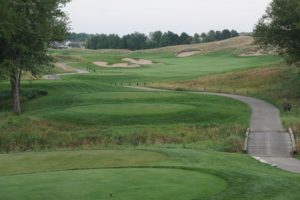 The Arnold Palmer Cup-coming this June to Rich Harvest Farms.

Because of the success of the Palmer Cup in 2015, when it was last held at Rich Harvest Farms, the last one Arnold Palmer attended in person before his passing in 2016, the group requested a return to Rich Harvest Farms to hold the matches in Sugar Grove again in the future. 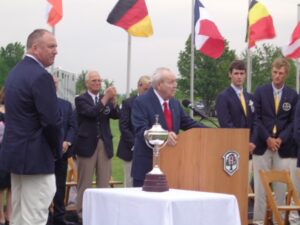 Arnold Palmer speaking at Rich Harvest Farms during the opening ceremonies in 2015.

But this time around some things will be different for the matches.

Because it’s time to welcome the ladies to the Arnold Palmer Cup matches. In 2015 the matches were men only. This summer there are both men’s and women’s teams. Plus players from around the world can now compete, no longer is it just Team USA vs a team from UK countries.

But there is more good news, fans will be allowed. But while Rich’s desire is to see as many fans as possible, enjoying top level amateur golf around the grounds of Rich Harvest Farms. RHF will work with local county and health officials to determine how many spectators can be allowed on property, during any given day.

But with some professional golf tournaments during the month of May being allowed to have 10,000 spectators per day. Arnold Palmer Cup championship staff is hopeful local officials will approve at least 10,000 patrons per day by June. So do get your vaccine shots if you can, prior to June 11th.

Golfers on Golf and Len Ziehm on Golf, caught up with Jerry Rich. Who spoke about The Palmer Cup returning to Rich Harvest Farms this June. Rich Harvest Farms is also the home golf course for Northern Illinois University (NIU) in Dekalb. Rich also shared his feelings about the much improved NIU Huskies golf teams. That he hopes will qualify for the NCAA National Championships in Arizona this spring.

Stay clicked in for more Arnold Palmer Cup announcements, including announcements on both players and coaches.