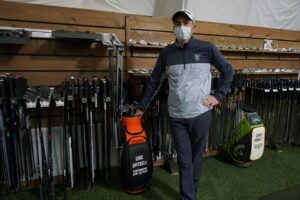 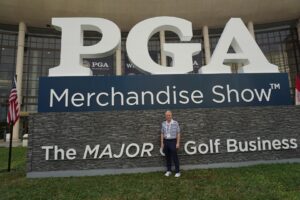 IT WAS SHOW WEEK in a virtual mode. But the PGA Merchandise Show did go on in a different way. It went virtual, maybe not viral, just virtual.

As the snow fell all weekend here in Chicago, I’m missing Florida and Orlando even more. But enough about shoveling, and more talk about golf.

I’M PROUD and HONORED to say that Golfers on Golf Radio received national recognition in the 30th annual ING (International Network of Golf) awards. The award program delayed for 2 days because of Zoom issues, finally went off the tee last Friday morning.

At the urging of podcast partner Len Ziehm who also contributes to Golfers on Golf Radio, I entered some of my work from radio, podcasting, and print. So for the first time I entered my media work in competition. But I have to thank Len, if he had not pushed me a bit to enter, I would not have.

Golfers on Golf Radio won an Outstanding Achievement Award (national runner up) for golf radio programs. It was our June 20th show that included guest host Tim Clarke from Wilson Golf. I thank Tim for coming into the WCPT AM 820 studio to do the show.

The award is one I’m happy to share with my co-hosts Ed Stevenson and Bill Berger. This year was the show’s 30 anniversary, just like ING’s. Special thanks to show founder Mike Munro for launching the program at WJJG-Am 1530 back in the early 1990’s.

But I must also thank WCPT-AM 820 GM Mark Pinski, and our producers Devin Andrekus and Paul Chivari who make us sound great every week.

SELLERS SHY is the new Executive Producer for Golf at CBS. But Shy is not the only change, there is new music and the leaderboard is now posted full time, like in football. But in the lower corner of your screen. So now you will see some different looks from the golf course as well. Stay tuned. I thought the graphics looked good, the but the scoreboard never scrolls down the leaderboard far enough for me.

PATRICK REED…geez the guy won FAIR & SQUARE. There would be no discussion if it wasn’t Reed involved. Even with a 2-shot penalty, Reed wins anyway (he won by 5 shots). CBS, the PGA Tour Rules people, and plenty of qualified rules folks chimed in on social media that Reed was legit with his embedded ball situation. So all you weak minded Twitter folks, move-on. NEXT !!!

THE 2021 PGA MERCHANDISE SHOW, saw over 11,000 golf industry professionals connect through the virtual show. There was nearly 400 exhibitors. But the normal attendance for the show in recent years is over 40,000. And almost double the exhibitors.

PERSONALLY I thank the PGA and Reed Expositions for trying to give the industry some sort of show considering the pandemic. But it’s not a format I would attend in the future. I’m not a fan of Zoom, it never really works well. Everything I tried to do this year through Zoom of video hook-up had issues.

I did enjoy a video chat with Tiernan Bryne about Golf in Ireland. He has me fired up to visit Ireland, maybe in 2022. So stay tuned on that. But…

I had trouble navigating a confusing site, that had too many registrations, portals, and password to run smoothly. So things I wanted to view I couldn’t find, or were over by the time I did. All of the Chicago major golf companies took a pass. Wilson Golf, Bettinardi Putters, Golftini women’s apparel and Tour Edge Golf.

Speaking of Tour Edge, Golfers on Golf has learned that Tour Edge will be making some major announcements maybe as early as next week. So stay clicked in.

Because of all the snow, that left dunes so high in my front yard. I’m ready to head south, and might do just that. It’s hard to spend all winter in Chicago-Covid or no Covid.