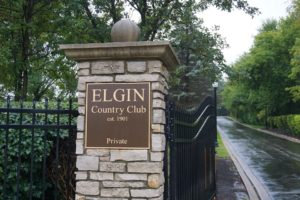 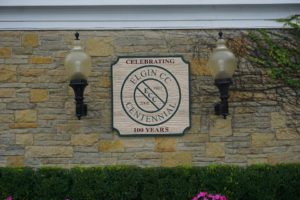 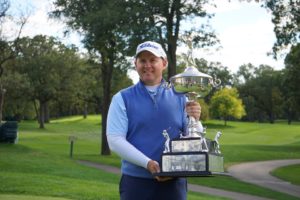 Chaussard was the two time defending champion in the event, but Chaussard won both of his titles at Kemper Lakes Golf Club in Kildeer. Elgin Country Club stepped up when the championship had to be moved, after a date change from May to September because of the Covid-19 Pandemic. 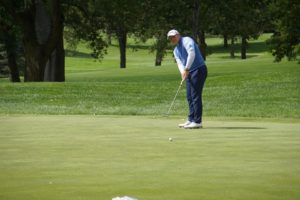 Elgin Country Club professional Jonathon Duppler rolls in an eagle putt on the 14th hole to take a 3 Up lead in the championship match.

After upsetting Medinah professional Travis Johns a past champion who won at Kemper Lakes in 2010 in the semi-finals, Duppler earned a ticket into the championship match with Chaussard.

Chaussard had wrapped up his semi-final match against St. Charles Country Club professional David Burdick 3 & 2, and had a chance to catch his breath before Duppler eliminated Johns.

When Duppler moved into the championship match, the small group of Elgin CC members that had been following Duppler in his matches all week, really started to grow.

As the championship match moved along, an army of over 25 golf carts was following the two players, and more members and course workers joined in walking along.

Duppler wasted no time sending a message to Chaussard that he was ready, when he eagled the first hole to go 1 Up. Duppler’s birdie on the third hole, coupled with Chassard’s short miss for par on the fourth hole, left Duppler 3 Up early into the match. 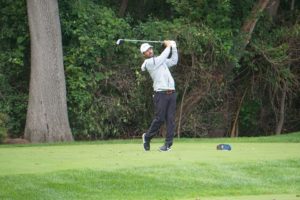 Garrett Chaussard hits his drive on the par 3, 9th hole that found the green.

Chaussard started to make a comeback winning the 8th hole, but Duppler birded the par 3, 9th hole and regained his 3 Up lead at the turn.

Then Chaussard won the tenth with a par, only to have Duppler win the 11th with a birdie.

Chaussard then made a birdie putt that did a full circle around the cup before falling on the 12th, and Dupplers lead was back down again to only 2 Up.

After halving the the 13th hole, Duppler drained an eagle putt from 25 feet on the 14th hole, to go 3 Up once more, but now with only 4 holes to play.

After missing the fairway on the 14th, Chaussard hit an outstanding approach to the back-upper tier of the green. His 6 foot birdie putt cut Duppler’s lead to 2 Up.

But Duppler’s par on the par 3 16th hole, was enough to close out the match, after Chaussard 3-putted from the green’s back fringe.

Duppler was immediately greeted by one of the club’s bartenders, who had brought out the champagne. Some of which was consumed, while some was sprayed on Duppler.

With the success of winning on his home course, Duppler said he would speak the clubs board of directors about having Elgin Country Club host the championship again in the future. The victory earned Duppler a ticket to Conway Farms Golf Club, and the Illinois PGA’s final major of the year, the Players Championship, which this year has only a field of the top 35 players in the year’s point standings.